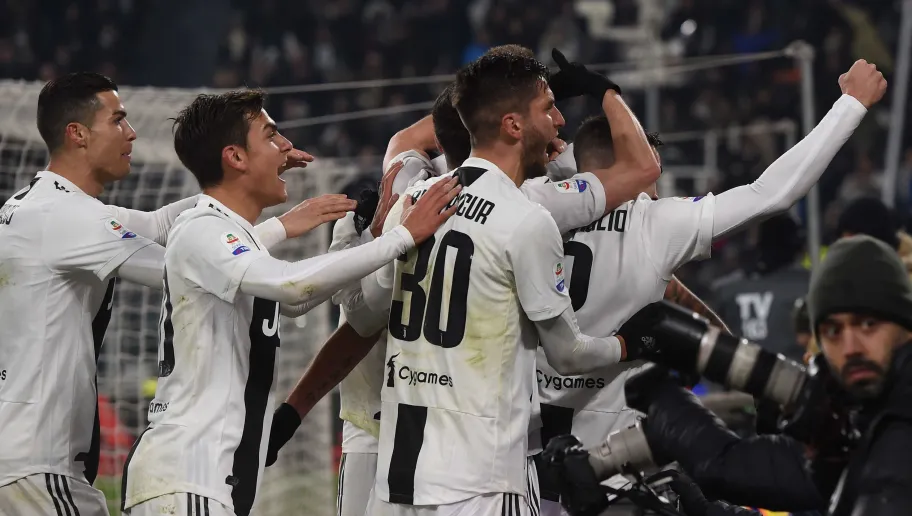 Juventus moved eight points clear at the top of Serie A thanks to a hard-fought 1-0 win at home to Roma on Saturday night.

The only goal came ten minutes before half-time when Mattia de Sciglio’s lofted cross was headed home at the far post by Mario Mandzukic.

Roma were defensively disciplined up to that point, and had their goalkeeper Robin Olsen to thank for keeping the scores level with the Swede producing a hat-trick of great saves throughout the first half.

However, Mandzukic’s towering header broke the deadlock shortly before the interval, for his eighth ​Serie A goal of the season.

The game started off at a lively pace, with neither team afforded the time to be able to settle into a rhythm with the ball.

Rodrigo Bentancur was lucky to see Steven N’Zonzi’s effort skew over the bar in the opening minutes after Bentancur was caught dawdling on the ball.

From that point onwards, the visitors frustrated the Bianconeri in the final third, but lacked any incisive attacking threat themselves.

After the restart, ​Cristiano Ronaldo had two great chances to double the hosts’ lead. His first attempt, a header from six yards, was bound for the back of the net but was kept out by the right arm of Robin Olsen.

From the resulting corner, Ronaldo fired at Olsen but was unable to poke home the rebound from inside the six-yard box.

The hosts had a second goal contentiously ruled out after Roma shot-stopper Olsen was adjudged to have been fouled, and Roma could not make the most of this decision going their way as they failed to break down a staunch Juve defence.

Brian Cristante’s late looping header caused a diving save from Wojiech Szczesny before ​Douglas Costa had a late tap-in overturned by VAR due to a foul in injury time.

On a night where the opposition did not allow ​Juventus to have a stranglehold on the game, the hosts’ stellar defensive record shone bright

After keeping a clean sheet here, the Old Lady have conceded only eight league goals so far heading into the second half of the season.

This is a statistic that could be key as Masimilliano Allegri’s side head into 2019 with the ultimate aim of lifting the Serie A and Champions League trophies.

​Alex Sandro was a constant threat when going forward from the left-back position, and looked sure to score when a deflected shot fell into his path, only to be thwarted by Robin Olsen.

Having signed a new long-term deal that will keep him in Turin until at least 2023, Sandro gave a good account of himself against a team in Roma who were Champions League semi-finalists last season.

Young midfielder Rodrigo Bentancur had an uncertain start to the game, needlessly putting his team in danger when he gave the ball away twice in quick succession.

The Uruguayan has had better games in a Juve shirt, but will be sincerely thankful that his early mistakes were not punished by Roma, who otherwise failed to create many chances in attack.

Defeat for Roma means that they have now won just two of their past nine games, with the team from the Italian capital currently sitting in tenth place, four points adrift of the top four.

Manager Eusebio di Francesco has been heavily criticised after his side’s poor run of form in recent weeks and, having met with club president James Pallotta last week, his sacking may be imminent following Saturday’s defeat.

Juve, who will top the table at Christmas, travel to Atlanta on Boxing Day with kick-off at 14:00 GMT.

Roma meanwhile, will be hoping to close the gap on the top four when they host Sassuolo on the same day at 17:00 GMT.