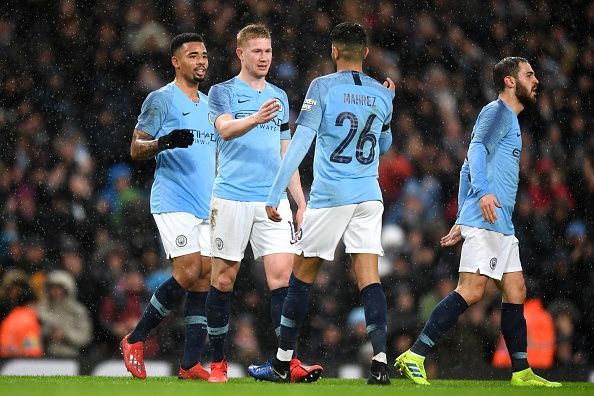 Newcastle made seven changes for Saturday’s FA Cup defeat by Watford and will recall a number of key players, including top scorer Salomon Rondon.

Fellow forward Joselu is out with a sprained ankle, while midfielders Mohamed Diame, Jonjo Shelvey and Ki Sung-yueng are also sidelined.

He missed City’s last game after complaining of a swollen knee following his comeback from injury at Burton.

Vincent Kompany is again unavailable because of a muscle problem that has ruled him out of the last six matches.

City made four changes for Saturday’s FA Cup win against Burnley, and players such as David Silva, Sergio Aguero and Aymeric Laporte are likely to return to the starting line-up.

Pep Guardiola takes charge of his 100th Premier League game, having seen his Manchester City side score 29 goals in all competitions since they last conceded.

Rafael Benitez, meanwhile, still cuts a frustrated figure as he is yet to welcome a new face to boost a Newcastle team who have lost eight league games at home already.

The reigning champions have the extra incentive of being able to reduce the gap to one point at the top of the table before Liverpool face Leicester on Wednesday, as the psychological part of the season hots up.

The hosts will have to defy history as well as form to secure anything at St James’ Park – Newcastle have taken only three points from the last 66 on offer against City.

Newcastle manager Rafael Benitez: “Each manager is managing the team he has, depending on the characteristics of his players.

“If you have top players you attack. But we need balance. One point could make all the difference, and goal difference is important for us as you have seen.”

Manchester City manager Pep Guardiola on whether playing before or after Liverpool is advantageous: “When we play later, when we play early, the only chance we have is to win the games. If we don’t it’s almost over.

“There are many points left to win. We can’t think too much about that and think what we have to do.”