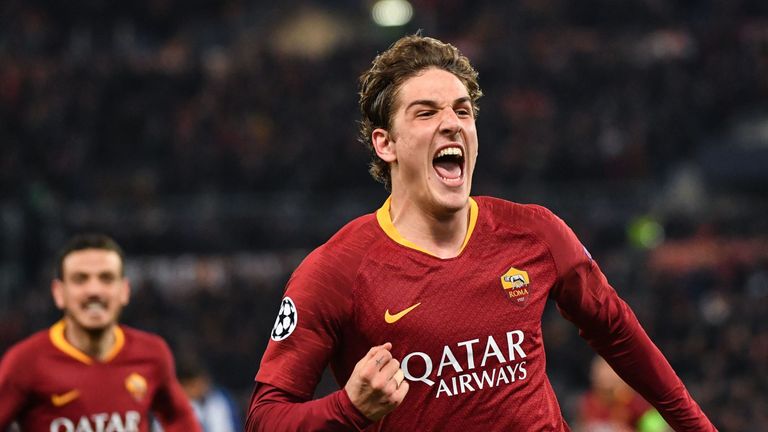 Nicolo Zaniolo scored twice to give Roma a 2-1 win at home to Porto in the first leg of the Champions League round of 16 on Tuesday.

Zaniolo has emerged as one of Serie A’s most promising talents this season since his transfer from Inter Milan last summer as part of the deal which saw Radja Nainggolan move the other way.

And the 19-year-old added his first Champions League goals by netting in the 70th and 76th minute for Roma, before Adrian Lopez pulled one back for Porto three minutes later.

The opening goal came after Edin Dzeko knocked down Stephan El Shaarawy’s cross for Zaniolo to drill past Iker Casillas and into the far bottom corner. The teenager doubled his tally by tapping in the rebound after a Dzeko shot came off the left post.

It was the second time Dzeko had hit the post.

Porto, who were undefeated in the Champions League this season, got a valuable away goal via a bit of luck when Tiquinho Soares’ effort bounced into the air and turned into an assist for Lopez, who fired into the far corner.

Teenager Nicolo Zaniolo scored a quick-fire double to earn AS Roma a 2-1 win against Porto in their Champions League last-16 first leg on Tuesday.

The 19-year-old continued his superb breakthrough season by finding the net twice in six second-half minutes to become the youngest Italian to score two goals in a Champions League match.

Porto substitute Adrian Lopez, however, quickly responded with what could prove to be a crucial away goal.

The result ended a five-match winning run in Europe for Porto, who will welcome Roma to the Estadio do Dragao for the second leg on March 6.

“It’s an incredible night, I am speechless and never would have expected such a thing,” Zaniolo said.

“However, we’ve got the second leg coming up, we shouldn’t have conceded the goal and we’ve got to think as a unit.

“We allowed Porto practically nothing, so we have to do the same in the second leg to qualify. I worked hard tonight, but I am very happy to do that for this team.”

Roma’s Edin Dzeko struck the post with the best chance of an uneventful first half, but the game opened up after the break as Bryan Cristante stung Porto goalkeeper Iker Casillas’ palms with a fierce shot and Porto midfielder Danilo headed a corner narrowly wide.

Zaniolo broke the deadlock after 70 minutes when he raced onto a Dzeko layoff to fire low into the corner, before Dzeko’s long-range shot came back off the post six minutes later for the teenager to tap in his second.

Porto responded almost immediately when Lopez latched onto a miscued effort by Tiquinho Soares to fire in from an angle with 10 minutes remaining.

It was Roma’s first win over Porto in five attempts, having lost their last meeting in Rome 3-0 in 2016 in the second leg of a 4-1 aggregate Champions League playoff victory for the Portuguese side.