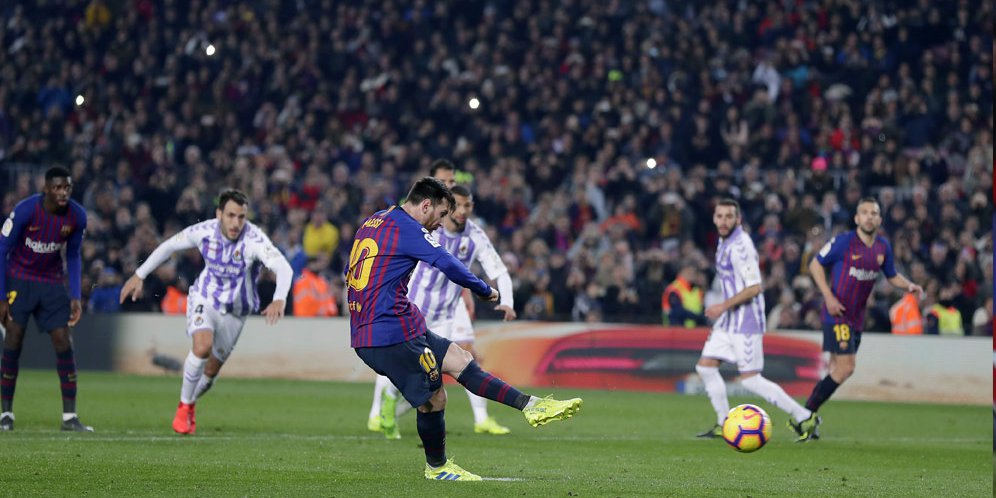 Lionel Messi scored one penalty and missed another as Barcelona beat Real Valladolid to move seven points clear at the top of La Liga.

Messi scored his 30th goal of 2018-19 when he converted his first spot-kick after Michel had fouled Gerard Pique.

Barcelona were awarded a second penalty when substitute Philippe Coutinho was brought down by Kiko Olivas, but this time Jordi Masip saved Messi’s strike.

Masip also made a number of saves to repeatedly deny Luis Suarez and Messi.

Relive Barcelona’s win over Real Valladolid as it happened

Real Madrid are third, two points behind Atletico, and play their game in hand on Sunday when they entertain Girona at 11:00 GMT.

With Barcelona facing Lyon in the opening leg of their Champions League last-16 tie on Tuesday, manager Ernesto Valverde opted to have Suarez and Ivan Rakitic among the substitutes, with former Tottenham and Portsmouth man Kevin-Prince Boateng starting.

Boateng had a low shot saved by Masip, who was with Barcelona from 2008 to 2017, but the visitors themselves wasted a glorious chance when they failed to convert a four-on-two counter-attack with Nacho overhitting the cross.

Within a minute of that Valladolid chance, Barcelona were ahead. Pique, playing his 300th La Liga match for the club, burst into the penalty area, Michel had his arms on his shoulders and Messi stepped up to convert the resulting penalty.

Sergi Guardiola, a player sacked by Barcelona in 2015 within a day of joining them after historical tweets critical of the team and the region were discovered, was part of the Valladolid side and had a chance early in the second half, but shot narrowly wide from 25 yards out.

But the hosts continued to produce good chances as Masip made a brilliant save to keep out Messi’s volley and then denied substitute Suarez and Ousmane Dembele.

A quick passing move involving Suarez and Coutinho saw the latter brought down for Barcelona’s second penalty, but Masip pushed away Messi’s effort, which had been placed in the same position as the first.

Masip kept his side in it with another excellent save to deny Suarez, with Messi also shooting narrowly off target. However, despite a good performance from the visitors, they could not force an equaliser and they are now 15th, three points above the relegation zone.

Lionel Messi netted his 30th goal of the season before missing his second penalty of the game as leaders Barcelona returned to winning ways in LaLiga with a 1-0 victory over Real Valladolid.

Gerard Pique won the 43rd-minute spot kick that proved the difference between the sides but, following back-to-back draws against Valencia and Athletic Bilbao in the top flight, Ernesto Valverde’s men were again short of their fluent best.

Those previous results and Atletico Madrid’s win over third-bottom Rayo Vallecano earlier on Saturday meant Barca went into the game with their now-restored lead at the top trimmed to four points.

Former Blaugrana goalkeeper Jordi Masip impressed in goal for Valladolid, not least after substitute Philippe Coutinho won a second penalty and he plunged to his left to deny Messi.

Masip guessed correctly to his left but was beaten for power and accuracy by Messi, before Pique made himself useful in his own box – getting a vital touch with Enes Unal poised to convert Nacho’s cross.

Sergi Guardiola dragged a shot wide as Valladolid continued to acquit themselves well in the second half, although they were indebted to a stunning reaction save from Masip as he denied Messi on the half-volley.

The visiting keeper scrambled from his line effectively to snuff out danger after Boateng sprung a flimsy offside trap in the 55th minute.

Luis Suarez replaced the ex-AC Milan attacker with an hour played and he was soon thwarted by Masip in a one-on-one.

Messi’s frustrations approached boiling point as he was booked for protests following a robust challenge from Anuar Mohamed.

He would prove the match-winner, even if Masip did his mood no favours five minutes from time, calmly pouching his headed follow-up from the penalty save.

‘We have not played well’ – what they said

“We struggled against them, we were not moving the ball quick enough and if not we suffer.”

“Bittersweet feelings. We had chances to get a draw and we need to be proud. We knew they would have chances of getting behind the defence.

“I managed to guess which way Messi was going to shoot.

“We need to pick up some points and get away from the relegation zone and be a bit more secure.”