Tottenham will have another chance to prove their title credentials on Saturday when they welcome Wolves to Wembley Stadium.

The hosts have been in impeccable form of late and have won their last four games, scoring 14 goals in the process.

It will be the job of Wolves’ stubborn defence to keep Tottenham’s free-flowing attack at arm’s length, but only Manchester City have stopped Spurs scoring this year in any competition.

Saturday could see ​Dele Alli return to the Tottenham fold after he sat out their 5-0 win against Bournemouth due to a hamstring injury. Right back Serge Aurier is also back in contention having recovered from a groin injury that’s kept him sidelined for most of the festive period. After sitting out their 1-1 draw at Craven Cottage last time out, Ruben Neves is likely to return to Wolves’ starting lineup on Saturday afternoon. Elsewhere, striker Diogo Jota could miss the trip to Wembley after he also sat out the Fulham game with a hamstring injury.

These two teams last met in the Premier League at the start of November, when Tottenham resisted a late Wolves fightback and ran out 3-2 winners at Molineux.

The result went with recent form between the two sides, as Wolves have not beaten the north London giants in their last five attempts. 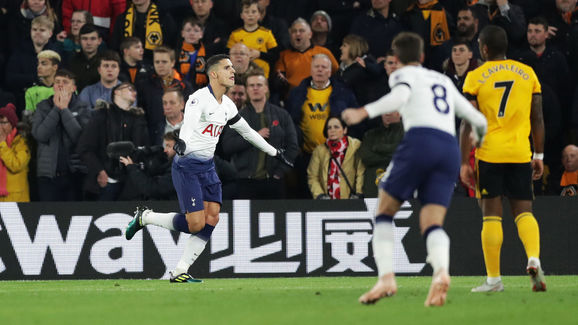 This fixture seems to always produce goals and their hasn’t been a 0-0 draw between the two sides since 1970, a run which extends to 37 meetings.

After picking up 24 points from the last 27 available, Pochettino’s men have propelled themselves into what seemed a highly unlikely mid-season title race.

With Manchester City losing last time out, Spurs overtook the reigning champions and have a chance to start 2019 in second place with a win over Wolves on Saturday.

Meanwhile their opponents have taken just ten points from their last nine games, but did enjoy a 2-1 win over Premier League aristocracy Chelsea at the start of the month.

Wolves currently find themselves in 11th place, but will be aware that a win at Wembley could see them rise as high as seventh.

Pochettino’s men are scoring for fun right now, notching 11 times in their last two fixtures. Even though ​Wolves have proven their defence is of Premier League quality, they should be overrun by ​Tottenham’s untouchable front four. Tottenham will continue their unlikely push for title contention and end 2018 in second place.