​Table-topping Liverpool host Arsenal in what’s sure to be a tantalising Premier League clash at Anfield on Saturday.

The two heavyweights meet on the back of contrasting festive periods. Jurgen Klopp’s Reds have continued their momentous charge towards a first domestic league title since 1990, whilst Unai Emery’s Gunners have lost ground on their fellow top four challengers.

Boxing Day’s results were potentially season-defining, as ​Liverpool thumped Newcastle at Anfield to steal a six-point lead at the top of the league, as champions ​Manchester City fell to a second consecutive defeat to leave Klopp’s side clear at the summit.

Meanwhile, ​Arsenal’s frustrating 1-1 draw away to Brighton left the north Londoners in the dust of ​Tottenham and ​Chelsea, as both won to pull themselves further clear of the Gunners in the top four race.

Liverpool could be without influential midfielder James Milner for the Reds’ final match of 2018. The 32-year-old sat out Boxing Day’s thrashing of Newcastle with a muscular problem.

Full-back Alberto Moreno is also set to be absent from Klopp’s side as the Spaniard continues to recover from a back injury. Defenders Joel Matip and Joe Gomez, as well as former Arsenal star Alex Oxlade-Chamberlain, remain longer-term absentees for the Reds.

Arsenal, meanwhile, could welcome back Shkodran Mustafi at the heart of their defence. The German centre back has not played since the Gunners’ win over Huddersfield earlier this month but could be in line to make a timely return at Anfield.

Emery, however, will continue to be without influential stars Hector Bellerin and Henrikh Mkhitaryan. Full back Bellerin is still recovering from a calf problem, whilst playmaker Mkhitaryan is facing a six-week layoff after suffering a fractured metatarsal.

Of the 225 times in which the two sides have previously met, Liverpool hold the superior historical record against the Gunners. The Reds have beaten Arsenal 86 times, whereas the north London side have beaten their Merseyside counterparts on 78 occasions. 61 of the two sides’ meetings have ended in draws.

The previous encounter between the sides resulted in a hotly-contested 1-1 draw at the Emirates, as Unai Emery’s side displayed a renewed competitiveness against another of the Premier League’s top sides. ​Alexandre Lacazette’s late equaliser for the hosts cancelled out a James Milner strike.

However, it was a very different story for the Gunners when they last travelled to Anfield, as Arsene Wenger’s side suffered a 4-0 dismantling at the hands of Klopp’s rampant Reds last season.

The Gunners have not beaten Liverpool since an ​Alexis Sanchez-inspired Arsenal claimed a comprehensive 4-1 win over the Merseyside outfit at the Emirates in April 2015.

Liverpool have been in unrelenting form of late, with Klopp’s side displaying the mettle of champions. A 1-0 win over ​Napoli at Anfield earlier this month sealed the Reds’ passage into the knockout stages of the Champions League.

The league leaders transferred their European heroics back over to their Premier League exploits with a resounding 3-1 win over ​Manchester United as Liverpool solidified Anfield as a big game fortress.

A battling 2-0 win away at Wolves was followed by an emphatic 4-0 triumph over Newcastle on Boxing Day and the Reds are leading the way at the top of the league with some conviction.

Arsenal, meanwhile, are in the midst of a patchier run of recent form. Emery’s side suffered their first defeat since August as the Gunners were stunned in a 3-2 defeat away at Southampton earlier this month.

A second loss in the space of three days followed as Arsenal suffered a 2-0 defeat to Tottenham in the Carabao Cup quarter finals, before the Gunners hauled themselves back to winning ways with a hard-fought 3-1 win over Burnley in the Premier League.

However, the Gunners suffered another setback as their 1-1 draw away to Brighton on Boxing Day saw them lose important ground on the top four. A positive result against the league leaders at Anfield is a must for Emery’s men.

Here’s a look at how both sides have fared in their previous five matches:

Arsenal have shown that they are capable of matching the top sides once more under Unai Emery, as shown in their 4-2 win over Tottenham and impressive display during their 1-1 draw with Liverpool earlier this season.

However, Klopp’s side have built uncompromising momentum since the two sides’ previous meeting in November, and trips to Anfield have proved the most daunting of tasks for the Gunners in recent years.

Arsenal have displayed increased winter fragility in recent weeks, whilst Liverpool have been in rampant form against all who have come before them. 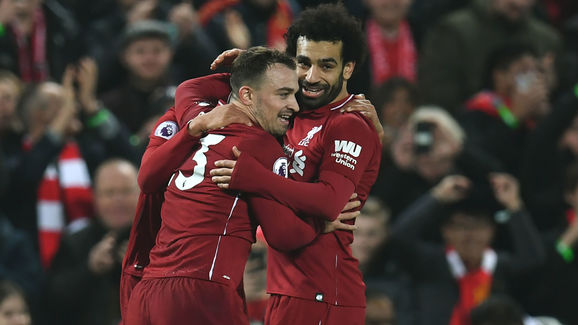 In what is also a shootout between Golden Boot-chasing duo ​Mohamed Salah and ​Pierre-Emerick Aubameyang, Jurgen Klopp’s Reds are likely to have too much power and purpose for the Gunners in their final match of the calendar year.