Amid a lively opening from both sides, the Spurs striker threatened early on with an audacious over-head kick, which fell into the grateful arms of Kepa Arrizabalaga.

Chelsea’s Callum Hudson-Odoi then tested Paulo Gazzaniga’s handling, before the game’s first moment of controversy. After latching onto a sumptuous Toby Alderweireld ball, Kane was upended by Kepa – only for the linesman to raise his flag.

However, after deliberation on whether the striker was offside, using VAR, referee Michael Oliver pointed to the spot – leaving Tottenham’s number 10 to convert confidently for his sixth goal in 12 outings against the Blues.

Compared to their collapse at Wembley early on in the season, Maurizio Sarri’s side seemed determined to amend their defeat. The ever-lively Hudson Odoi came closest to equalising, when his shot was brilliantly tipped onto the woodwork by the impressive Gazzaniga.

Their domination in the second period continued. Firstly, Eden Hazard was thwarted at long range by shot-stopper Gazzaniga, before Andreas Christensen was found wanting after blazing over from six yards. 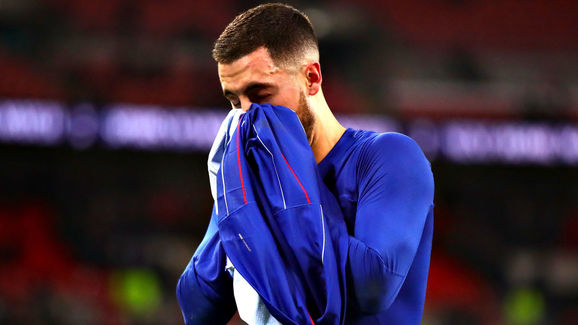 The Danish defender’s failure to convert would prove to his side’s last meaningful chance though, as Sarri’s side suffered a second defeat at Wembley this season.

Despite blowing away their opponents in November, Mauricio Pochettino’s stubborn outfit demonstrated their defensive capability with a more shrewd performance this time out.

They were organised and hard to break down, and Gazzaniga and Alderweireld in particular were outstanding.

Assisting the game’s only goal and recording a welcomed clean sheet, Toby Alderweireld was once again faultless in the heart of the Tottenham defence. Making his 27th appearance of the campaign in all competitions, more than any of his defensive counterparts, the Belgian led his team with an assured performance.

Alongside partner Davinson Sanchez, both marshalled the back-line impeccably. Mind you, their last wall of defence, Gazzaniga, ran them close.

Whilst Spurs were defensively sound, it was an unusually lacklustre attacking display by their aforementioned trio. In particular, neither playmakers Dele Alli or Christian Eriksen were able to stamp their authority on the game.

Much has been made of Sarri’s desire to bring in another striker to south London – a wish he’ll now be demanding after his side’s failure to get on the scoresheet again.