Eric Dier scored a massive penalty for England at the World Cup last summer. It was his kick from the spot that clinched victory for the Three Lions over Colombia in the Round of 16.

On Thursday, it was his kick from the spot that doomed Tottenham Hotspur in the League Cup semifinals. Spurs lost 2-1 on the night to make it 2-2 on aggregate, and then were defeated on penalty kicks as Chelsea advanced to the final at their expense.

Tottenham conceded the first two goals on the evening, but they showed fight to respond and force the penalty shootout. Things might have been different had Spurs had a healthy squad, or at least something close to a healthy side 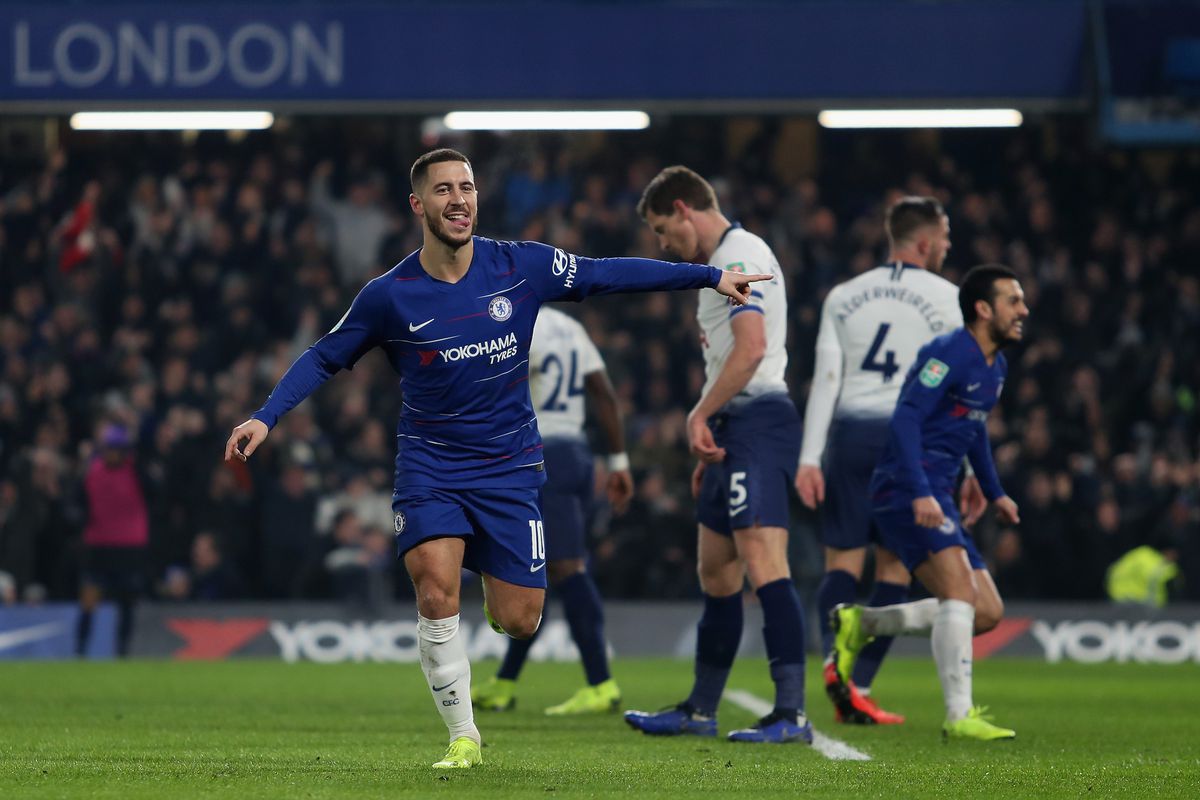 Harry Kane is already out until March with an ankle injury, and then Dele Alli limped off against Fulham last weekend. Dele’s hamstring injury will also keep him out until March, and it meant Mauricio Pochettino was without two of his most important players for this crucial semifinal.

Thus, the Spurs team looked a bit like patchwork. Fernando Llorente started up front, while Moussa Sissoko returned from an injury to play with Harry Winks and Eric Dier in a three-man midfield. Serge Aurier and Ben Davies were the fullbacks chosen to play outside the two centerbacks: Jan Vertonghen and Toby Alderweireld. Paulo Gazzaniga once again took his place in goal for the League Cup.

A chippy start at Stamford Bridge briefly evoked memories of the infamous “Battle of the Bridge” from May of 2016. Dier picked up a few fouls and Spurs gave away some inconvenient free kicks.

It was evident from the outset that Spurs would not be playing with the same type of attacking cohesion that they usually do. Pochettino’s team were doing next to nothing going forward.

Then, the problems started to stack as Tottenham became sloppy in possession. They conceded a needless corner in the 27th minute when Alderweireld couldn’t decide what to do with a slow, rolling cross. Gazzaniga had to clear the ball behind the goal, and Spurs were made to pay.

Chelsea’s ensuing corner came back out to N’Golo Kante, who made great contact to smash a ball through the bodies and into the net. Gazzaniga could’ve done a lot better, but he had little time to react. The move was started after a giveaway up the pitch by Llorente. The Spaniard struggled once again to have anything but a negative impact on the team.

The home side continued to push after the goal. Their play was noticeably more refined and incisive than what the depleted Spurs squad could offer. To make matters worse, Davies was then forced off with what looked like a groin injury. Danny Rose replaced him.

Stamford Bridge erupted again about seven minutes before the break. Chelsea made it two with a well-worked passing sequence that took advantage of some poor defensive positioning. Eden Hazard eventually slotted a cross home from the penalty spot.

Tottenham had been in better position after the first leg, but now they found themselves against the ropes at halftime of the second leg. Their lead had turned into a deficit in just 38 minutes, and Chelsea had all the momentum.

Changes were needed. After the break, Dier dropped back to play as a third center-back. Tottenham’s back four had been repeatedly exploited as their fullbacks couldn’t deal with the need to create width while also staying disciplined in defense.

Spurs immediately looked better in the new system, and it didn’t take long for them to find their equalizer, partially thanks to the freedom allowed by the new formation.

Rose found space in an advanced position down the left and was able to curve a cross to the six-yard box. Llorente redeemed himself as he stooped in between David Luiz and Emerson to head the ball past Kepa Arrizabalaga.

The Blues almost responded immediately. Olivier Giroud found himself bearing down on goal, but his shot was stopped by Gazzaniga.

Chelsea couldn’t find a third goal despite regaining control of the match. A few of their shots were put barely wide by Hazard, and some were wasted by others. On one occasion, Vertonghen had a sequence of last-ditch blocks that were the only thing stopping the home side from putting the ball in the net once again.

New rules in this year’s Carabao Cup mean that there is no extra time. As things stood, the match was going to penalties.

Both teams went to their bench late on. Tottenham brought on Lucas Moura for Llorente, as well as Davinson Sanchez for an injured Sissoko, which shifted Dier back into midfield. Chelsea replaced Pedro and Ross Barkley with Willian and Mateo Kovacic.

Maurizio Sarri’s team had the winner on the night, but no one could find the winner on aggregate. The tie went to penalty kicks after another period of Chelsea dominance at the end of regulation.

Christian Eriksen was first up for Spurs, and he did his job. In fact, he made it look easy. Willian responded for the Blues.

Erik Lamela tucked another penalty home, and then César Azpilicueta did the same to leave things even after two takers.

Dier’s time came, and his kick went over the bar, but Jorginho scored his after a little hop-step threw Gazzaniga off.

Lucas compounded the failure with a weak kick that was saved by Arrizabalaga, and then David Luiz scored to clinch it for Chelsea.

The Blues go on to face a Manchester City team that beat Burton Albion 10-0 on aggregate in the other semifinal.