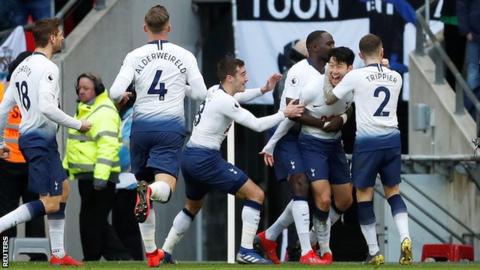 Tottenham scored a late winner for the third game in succession to beat Newcastle United 1-0 and move up to second in the Premier League.

It was a goal that felt harsh on the Magpies, after they had defended in resolute fashion for 82 minutes, before Son Heung-min’s long range strike was fumbled by Dubravka, on a day when the goalkeeper had otherwise performed admirably.

​Tottenham struggled to break Newcastle down for much of the game despite dominating possession, with Newcastle content to maintain a compact shape by keeping men behind the ball in an effort to frustrate the hosts.

The game’s first chance came in the 17th minute, Erik Lamela picking out Lucas Moura with a wonderfully weighted ball into the box. However, the Brazilian, who has not scored since Boxing Day, inexplicably headed wide when presented with a free header from seven yards out.

Spurs’ next missed chance was more a case of bad luck rather than bad execution, Lamela again involved as he saw his header cannon off the bar from Jan Vertonghen’s inviting cross.

The hosts were agonisingly close to taking the lead before half-time, when Moussa Sissoko’s shot was parried by Newcastle goalkeeper Martin Dubravka into the path of Davinson Sanchez. Fortunately for Dubravka, Jamal Lascelles was on hand to hack the ball away from danger. 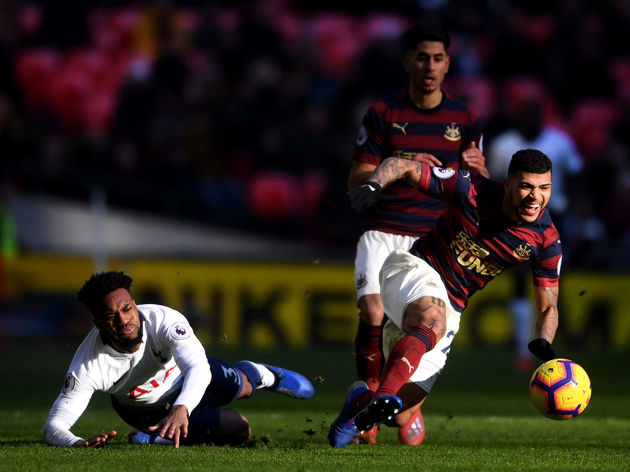 Newcastle had their best opportunity of the game five minutes into the second half, the woodwork again coming into play to deny Salomon Rondon’s towering header.

Fabian Schar came to his side’s rescue midway through the second period, his goal-line clearance preventing Christian Eriksen’s flick from breaking the deadlock. Agonisingly for the visitors, that deadlock was broken with just under ten minutes to go after Son’s strike crept in to give ​Tottenham all three points.

However, they stuck to their task, and were rewarded with their third late winner in the last eight days, having previously edged past Fulham and Watford.

Pochettino will not care in the slightest though, as victory ensured that Tottenham will move above Manchester City in the Premier League for at least 24 hours, with the champions hosting Arsenal tomorrow afternoon.

​Son Heung-min was Spurs’ saviour once again, coming up with the goods when his team needed them most. Since returning from international duty with South Korea, he has scored in each of his last two games. The 26-year-old was a key contributor for Spurs once again on Saturday, scoring his ninth goal in his last ten appearances to give his side a victory that they ultimately deserved.

Son’s winner sees Spurs move above Manchester City in a week where their players demonstrated admirable character to earn the team nine points from three games which they could have lost.

Much has been made of Spurs’ recent injury troubles that have seen Dele Alli and Harry Kane sidelined.

The need for a goal-scoring back-up to Kane looked apparent following the lacklustre performance of Lucas Moura, which saw the Brazilian have a game to forget.

Lucas, who was Tottenham’s last signing in January of last season, will be kicking himself after he somehow missed the target with his first half header. Lucas’ failure to get on the scoresheet meant that he is still yet to notch a goal in 2019 so far.

A come from behind victory against ​Manchester City on Tuesday seemed to have lifted the spirits of the Newcastle players, as they maintained their discipline and concentration levels to stifle Spurs in the final third. They fought well, demonstrating their defensive qualities that have seen them concede fewer goals than Manchester United in the Premier League so far this season, before Spurs somehow found a way through in the closing moments.

The loss will be a bitter pill to swallow for Rafael Benitez and his players, but they can take great heart from their performances against Spurs and Manchester City over the last few days,

A heroic performance from Fabian Schar in the heart of defence epitomised the dogged and determined approach of the Newcastle players, who defended stoutly from first minute to last.

Schar’s last-ditch intervention turned out to be key for the visitors, as they managed to dig in during the final quarter of the game, but they were unable to deny Spurs from sneaking a win in the closing stages.

Schar also deserves praise for the way he marshalled his troops to frustrate Fernando Llorente after the Spaniard was introduced on the hour in an attempt to swing the game in Spurs’ favour, but he barely had a sniff of a chance in front of goal.

Singling out Martin Dubravka’s error may be construed as harsh after he commanded the Newcastle box with authority for much of the game.

However, games of football, especially in the Premier League, are won and lost by the finest of margins. Ultimately, it was Dubravka’s fumble that cost Newcastle a point that they would have fully deserved, but the Magpies shot-stopper will be kicking himself after having committing such a basic error.