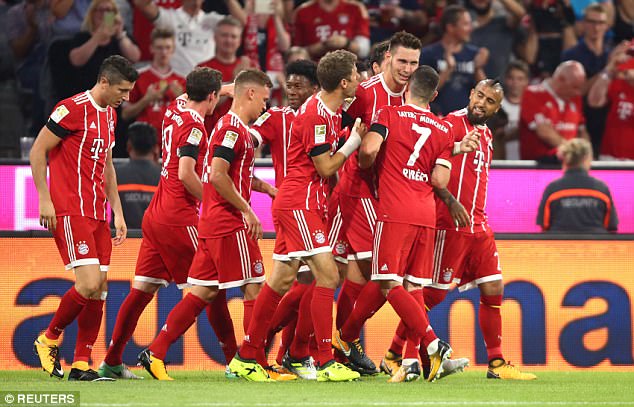 Bayer Leverkusen stunned champions Bayern Munich with a storming 3-1 victory over the Bavarians in a pulsating game at the BayArena in the Bundesliga on Saturday.

Bayern took the lead against the run of play as Leon Goretzka made a strong run from midfield to get on the end of a dangerous cross into the area from Thomas Muller, heading the visitors into the lead four minutes before half time, with Kai Haverz’s injury late in the first half a blow to the home side.

Robert Lewandowski looked to have doubled the lead with a clinical finish to round off a fine attacking move from ​Bayern just before the interval, but the Polish striker was judged to have been marginally offside and the goal did not count.

Leon Bailey curled home a sumptuous free kick just seven minutes into the second half as Leverkusen got the goal that their efforts in the game had deserved, and Bayern collapsed from that point on.

The score was turned on its head just after the hour mark as Leverkusen executed a lightning counter-attack to perfection. Karim Bellarabi received the ball in the box before showing great composure to square the ball to captain Kevin Volland, who was free to finish the move with a simple finish.

The home side sealed the three points as Leverkusen broke into Bayern’s box once again. The lively Julian Brandt squared the ball into the path of substitute Lucas Alario, who tapped home into an empty net to seal a famous win for Peter Bosz’s impressive young side.

Bayern Munich arguably possess the greater quality in their ranks, but Kovac’s men struggled to deal with the home side’s high intensity and application on Saturday. Peter Bosz’s team pressed the Bavarians with real purpose every time they received the ball in all areas of the pitch.

James Rodriguez attempted to pull the strings for the visitors whilst Kingsley Coman looked the most dangerous attacking outlet for the champions, but Bayern often struggled to break down a Leverkusen side which was brimming with energy and had precision in their passing to match.

Leverkusen displayed great intensity and application in the middle of the park in particular, with the likes of Charles Aranguiz squeezing Bayern off the ball almost every time they looked to engineer an attacking move. The home side’s youthful exuberance and desire caused real problems for Kovac’s experienced team, whilst Leon Bailey epitomised their quality in attack.

STAR MAN – Leon Goretzka was Bayern’s main man in matching Leverkusen’s energy and purpose on Saturday. The former Schalke midfielder was the driving force from the middle of the park for his side, pushing forward from his deep midfield position at every opportunity. Goretzka’s drive and determination was rewarded as the German arrived in the box with a typically strong and decisive run to head home Bayern’s opening goal.

WORST PLAYER – Bayern’s defence was exposed against the pace and energy in Leverkusen’s powerful frontline, and Niklas Sule in particular was unable to deal with the likes of Karim Bellarabi as the home side’s attacking stars broke clear of the visitors’ backline at will.