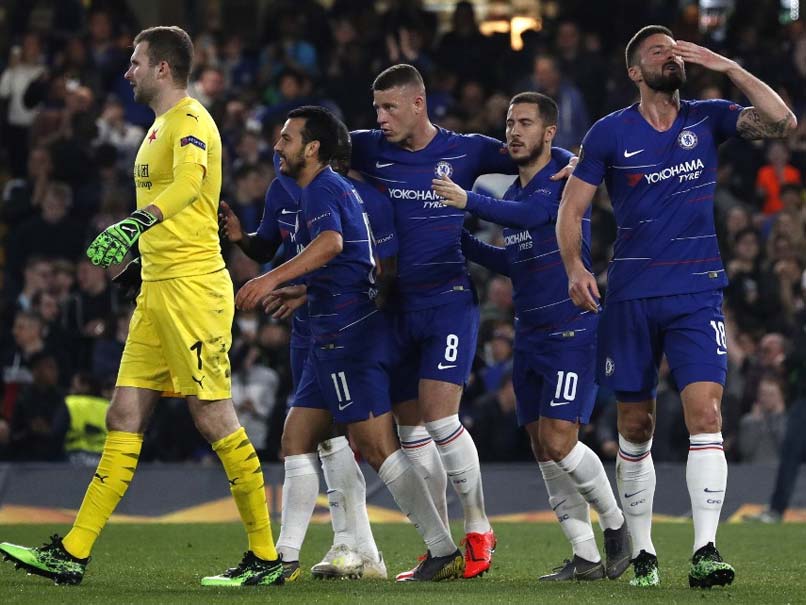 Chelsea laboured to a 4-3 victory against Slavia Prague in their Europa League quarter-final second leg at Stamford Bridge, booking themselves a spot in the semi finals with a 5-3 win on aggregate against the Czech side.

After the dissatisfaction of the weekend’s defeat to Liverpool, the Blues were eager to bury some league demons with a strong showing from the off in Europe, and they duly raced out of the traps with fervour.

This produced results inside the first five minutes, with Pedro opening the scoring after some wonderful link up play with first Cesar Azpilicueta and then ​Olivier Giroud, who sweetly played it in for the Spaniard to dink over the goalkeeper.

He was then saved some severe blushes when another fine flowing move involving first Giroud, and then ​Eden Hazard, who played it nicely across goal for the winger to finish, somehow ended with the Spaniard striking the post with the goal gaping – only for it to cannon into Prague defender Simon Deli and bounce back into the net.

Perhaps afraid of repeating the trick, Pedro turned down the chance for a brace after latching onto a wonderfully weighted ball from N’Golo Kante, instead playing it off to Giroud for the Frenchman to net his 10th goal of the competition.

The visitors then restored some dignity, as Tomas Soucek nodded in a free header at the back post, only for Chelsea to hit their fourth of the night just 63 seconds later. Hazard again played the ball across the face of the goal, with Giroud taking the first unsuccessful bite of the cherry before Pedro had it in the back of the net once more with a scuffed finish.

However, after a first half of plenty for the Blues, Peter Sevcik found it within himself to produce not one, but two cracking strikes into the top-left corner inside the first 10 minutes of the second period to spark the tie back to life.

Ultimately though, it was to no avail, and the Blues stayed firm to reach their 14th European semi final.

It wasn’t as good a game as that vaunted Champions League clash between Tottenham and Manchester City on Wednesday night, but it was almost as ridiculous. There was no VAR to join the party, but there were still seven goals. Almost all of them were ridiculous, in either a good or a bad way. For Maurizio Sarri though, it will have been a frustrating night. For once, the Blues managed to take their chances with some conviction in front of goal, yet they still found a way to make it unnecessarily uneasy for themselves in that second half, with concentration lapses far too common.

A semi-final beckons, but more care will need to be taken against Eintracht Frankfurt if the club are to escape the cruel grips of Europe’s lesser league next season.

STAR MAN – Despite that inconceivable miss in the first half, Pedro played a key role in almost everything good the Blues did in the opening stages. He was his usual scampering self, harrying defenders with gusto and launching onto attacks with glee.

Sure, his finishing was, err, hit and miss, but he was still the difference maker, and his considerable European experience was vital in seeing out a confounding second period.

After booking their spot in the semis, ​Chelsea can now look forward to a break of sorts, with their next Premier League outing not scheduled until Monday at Stamford Bridge against Burnley. Following that, it’s the crucial trip to Old Trafford to play top four rivals Manchester United.