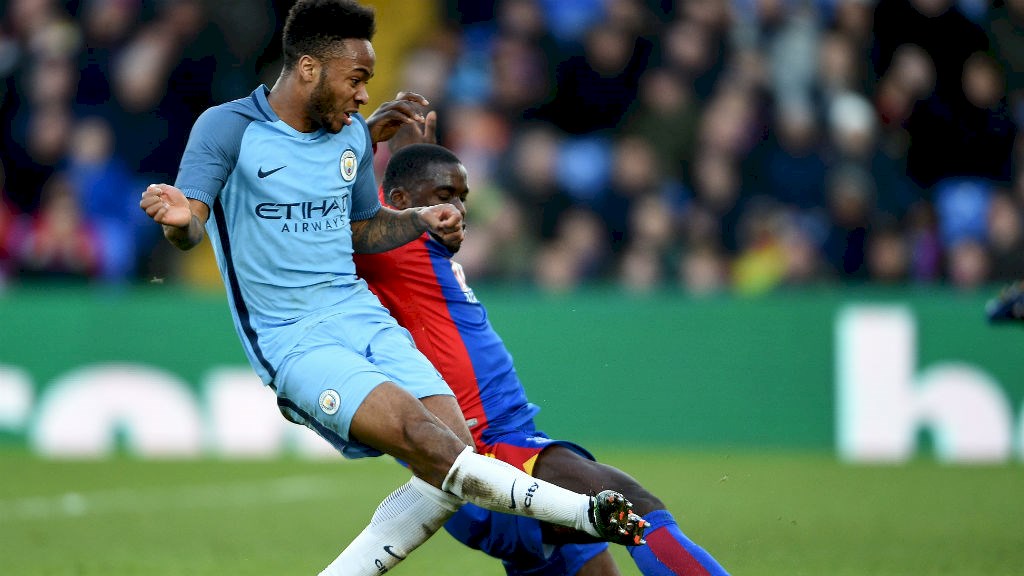 Manchester City lost ground to Liverpool in the Premier League title race on Saturday as Crystal Palace registered a shock 2-3 victory at the Etihad, which ​included a goal of the season contender from Andros Townsend.

Unsurprisingly, Manchester City dominated early possession, as Crystal Palace’s dogged defensive style saw them fight back the one-way traffic for the first 25 minutes, as the Eagles did not register a single shot during this period.

Rather inevitably, City took the lead in the 27th minute, with the goal coming through an Ilkay Gundogan header.

Palace midfielder Jeffrey Schlupp failed to track the German’s run into the box as he arrived to meet a well-weighted cross from Fabian Delph to nod the ball past the helpless Vicente Guaita.

It took Schlupp about five minutes to make up for his lapse in defensive concentration as Palace grabbed a shock equaliser from the Eagles’ first effort on goal. A rare break into the City half saw Schlupp receive the ball after some Zaha trickery on the right hand side, he managed to work the ball on to his favoured left foot on the left hand side of the City box, before firing the ball across a full stretch Ederson and into the far corner to give Crystal Palace a completely undeserved equaliser.

A few minutes later, Palace well and truly ripped up the script as they completed the turn around in unbelievable style through Townsend. Bernardo Silva’s defensive header fell to the left boot of Townsend, and the winger fired in an absolute missile of a volley into the top corner of the City net from around 25 yards to silence the Etihad and give the Eagles a shock lead.

The second half began in the same illogical way that the first half ended. Palace full back Aaron Wan-Bissaka’s cross was headed against the post by Townsend, before Max Meyer’s sprint towards the loose ball was abruptly halted by a rash sliding challenge from Kyle Walker. Palace penalty taker Luka Milivojević made no mistake from the spot, firing out of reach of a diving Ederson, to increase Palace’s lead.

Guardiola brought on Sergio Aguero, Kevin De Bruyne and Riyad Mahrez in an attempt to rescue the game. While the Belgian playmaker did pull one back through a cross-shot, the goal was ultimately a consolation as Palace held on to become the first visiting team to win at the Etihad since Manchester United’s 3-2 victory in April.

An off day for City? I suppose we are all allowed one.

The fear for Pep Guardiola however will be how Crystal Palace made so much of their rare ventures forward.

He may also be worried that the tactics used by Palace manager Roy Hodgson really stopped City’s usually scintillating football. The compact centre of the pitch meant that City were resulting to crosses and long range efforts rather than them attempting to play through Palace’s bodies.

Guardiola called upon the injury-ravaged Belgian in the second half to try to change the game. Whilst he failed to earn them any points from the match, he did show the City fans what they had been missing in his absence.

He ensured City were less wasteful in possession and scored a goal – albeit from a cross. City had started to lose their way in the game until De Bruyne entered the field.

When a game is not quite going City’s way, Pep Guardiola will hope that his player’s keep their composure and do not panic. Kyle Walker will not have assured him that this is the case.

The English right-back failed to close down Schlupp’s first half effort, and gave away the penalty for Palace’s third goal with an untidy sliding challenge in the box. A poor performance.

The return of Wilfried Zaha is a giant boost to Roy Hodgson’s side coming into the festive period. Zaha played as an unconventional target man, holding the ball up with his trickery and pace.

While Townsend’s goal will be what most remember from this game, the Ivorian was the main reason why Hodgson’s tactics were so effective in gaining them an unlikely victory.

Unbelievable work rate, good pace on the counter-attack and a wonder goal to boot; Andros Townsend will never forget his Christmas miracle of a trip to the Etihad in 2018.

The former Spurs man had easily one his best games in a Palace shirt as he showed that their attack is not just about Zaha. His goal alone is worthy of being star man.

No bad players for Palace today. I suppose McArthur was just less noticeable, as it was Palace’s pacey attacking players who made the difference for them during the game.

Manchester City will hope to put their chase of league leaders Liverpool back on track as they travel to the King Power Stadium to face Claude Puel’s Leicester City on Boxing Day.

Crystal Palace have a crunch home game against another relegation threatened side to look ahead to Boxing Day, in a fixture that will be labelled as the cliche ‘six-pointer’. Cardiff City travel to Selhurst Park for a clash which will see both sides desperate to take crucial points over the busy festive period